Putt Percent is a group of statistics that shows the number of putts to hole out as a percentage of the total putts (by hole) included in a report.

Consider the following data for a 9 hole round:

This gives us a Putt Percent of:

Putt Percent can be found on:

Also see Three Plus Putts Percent Per Round. 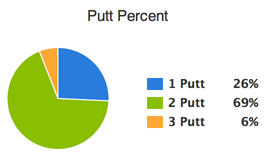