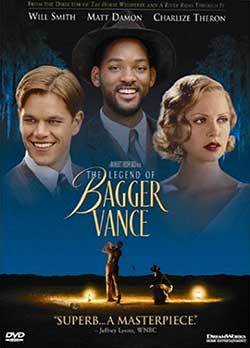 The basic storyline in the movie is about Randolph Junuh, a golfer from Savanna Georgia who was convinced to play in an exhibition match against two of the worlds greatest golfers in an attempt to save a newly built golf resort, and to some extent all of Savanna, during the great depression. Junnuh (played by Matt Damon) was from Savanna and showed incredible potential as a young player before he was drafted and sent to war. When he returned his experience in the war caused such internal strife that he could no longer play golf as he once did, but with the town of Savanna depending on him so much he decided to play. At this point a mythical caddie named Bagger Vance (played by Will Smith) appears and helps Junnuh to find his "authentic swing" by quieting his inner demons allowing him to finish the exhibition match one stroke behind the other two due to a penalty he called on himself. It was a good movie, but the lesson to be learned can be found when the narrator described the three players in the match.

"Hard to imagine three more different approaches to the game of golf.
Bobby Jones' swing was a study of grace in motion.
He had a way of making the difficult shots look easy and the easy shots look even easier.
Hagen, on the other hand hit more bad shots in a single game than most golfers do in a season.
But Hagen had long ago learned one thing: Three lousy shots and one brilliant shot can still make par.
And Junuh? Well, even now I can't think of it without wincing."

"Three lousy shots and one brilliant shot can still make par" - it may not be the best strategy, but it is true. Every golfer has different strengths and weaknesses in their game, and tracking performance with a golf statistics tool can help make those clear. The fastest way to achieve better performance is to strengthen the weak parts of your game but sometimes you can hit a wall.

Watch out for the point of diminishing returns, that is, watch for the point at which working on a particular weakness stops producing improvement. Golf statisic and diagnostic tools like Golf Stat Lab are good at showing a player their weaknesses and suggest where to spend practice time, but they also show you where you are improving and where you are not. If you have identified a weakness in your game and work on it you should see those stats improve over time. If you see that your improvement stops in those skill areas you need to ask yourself if perhaps your training methods need to be changed, or do you need to move on and work on something else?

The good thing about having strengths is that sometimes they can compensate for a weakness. Don't ignore your strengths in practice because if you can make them your brilliant shots then you can sometimes cover for your lousy shots with them.